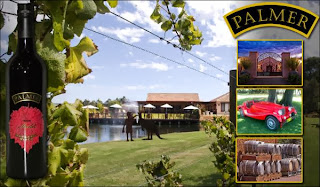 Palmer Wines Merlot 2010 Merlots have been winners for Plamers for a long time grabbing medals both locally and internationally. The tasting note say:

Light leafy fruitcake [where do they get this nonsense??] and dark plummy fruits on the nose with a light cedary character. It is soft and generous [ like a mothers bosom ?] with a good oak and fruit balance. Dusty dry tannins add balance and poise to finish."

Wayne says: Mmmm does that mean it is lumpy like a fruitcake?? I am just dieing to try a glass or 3.


There is a story with Palmers Wines in the Margaret River region of Western Australia:

Established by Stephen and Helen Palmer in 1977 as one of the pioneer vineyards in the Margaret River region of Western Australia.
The initial planting on the banks of the fertile Wilyabrup River included Chardonnay, Semillon, Sauvignon Blanc, and a small amount of Cabernet Sauvignon and Merlot.
With 50ha in Wilyabrup It all started to fall into place when Palmer’s 1999 shiraz was judged the best WA wine and best WA dry table wine at the 2000 Perth Wine Show. That year their 1999 merlot also won a gold medal.

Their wines soon chalked up awards on a regular basis and continue to do so under current winemaker Mark Warren. And the pleasing thing for the Palmers is that they have a strong stable of award-winning wines, for such a small producer.

While chardonnay figures prominently among them, their semillon sauvignon blanc, Crackerjack cabernet shiraz, shiraz and merlot have won gold, while their 2007 cabernet sauvignon won a silver medal at the prestigious London International Wine Challenge. Their rose is also proving popular.
But wine alone doesn’t make Palmers. Their Tuscan-style restaurant, which is designed also for alfresco dining, is one of the eye-catching eating establishments in the Margaret River wine region.

It has thrived under innovative young chef Coby Cockburn.
Hailing from Port Douglas, Coby (30) moved to Western Australia and was quickly enticed to Palmers by Helen Palmer.

"Coby is a real find - he brings a spark anbd a passion for food that is essential to the Palmers dining experience - we're really excited about where he wants to take our restaurant," said Helen.
Coby adores his trade – starting his apprenticeship at 16 and going on to work at notable Port Douglas eateries including Watergate as executive chef.
Not many Australian chefs can lay claim to cooking for Canadian heart-throb and fresh seafood devotee Keanu Reeves but Coby Cockburn can; he was the star’s personal chef, no less.
For almost three weeks in 2002, he cooked a multitude of meals, including plenty of fresh crayfish, for the Point Break star and about 45 of his family and friends on Double Island in Queensland, where he was holidaying amid filming sci-fi trilogy The Matrix.

It’s no wonder that with his talents and such a spectacular venue that Palmer has become popular for major events, weddings and birthdays.

Palmer held WA heats of the Miss Universe contest last year and was the hub of this year’s Margaret River Wine Festival. Both were outstanding successes.
One thing about the Palmers, they aren’t content to just watch the vines grow under them, so to speak.
They have just established a new cellar door adjacent to the restaurant, where it was previously housed.
This has created yet another quality facility at Palmer and created more room in the restaurant for diners.
It also has its own unique characteristics, with its stone-look, barn appearance.
Posted by Wayne Mansfield at 01:44